Pasture on an island 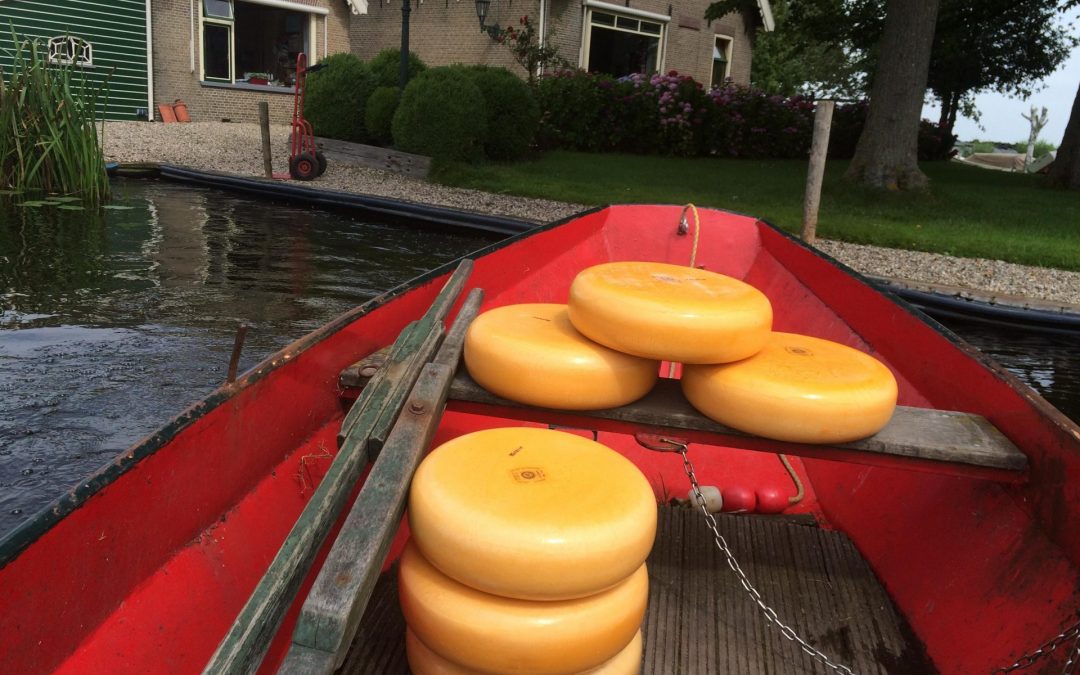 Pasture on an island

On an island in the Kagerplassen in Rijpwetering (South Holland) about 150 cows are grazed. At least, much of the year. It may not be useful to keep your cows on an island, especially all the more so. Until recently you had to sail the rowboat as a visitor, now there is also a ferry to the 64 hectare island. It started in 1932 with Koosje and Huug van der Poel. Now the farm is controlled by Marije and Hugo van der Poel, huug's grandson.

What is the strength of the company?
The young cattle are on the mainland a few hundred meters away so that all the cows have all the space they want. A total of 104 hectares are available for 150 cows. Marije: "We graze our cows on a large piece of land so that they can search for the plant they need at that moment. That's the strength of our company. I once got it as a tip from another cheesemaker. Since we did that, the quality of our cheese has really gone up." The proof: the cheese of Hoeve Waterrijk won three more medals last March, including the Cum Laude Award 2020 for the best farmer's cheese speciality in the Netherlands. There were about 25 competitors in this category.

What kind of breed of cows do you keep?
"It is mainly Holstein Frisian cows, with some Blaarkop blood. And a few years ago, my husband crossed some Montbéliarde. That's a French breed that gives good milk on a sober ration. This is important, because for the taste of the cheese we want the cows to eat as much fresh grass as possible and as little other feed as possible. This mix of varieties can do that." 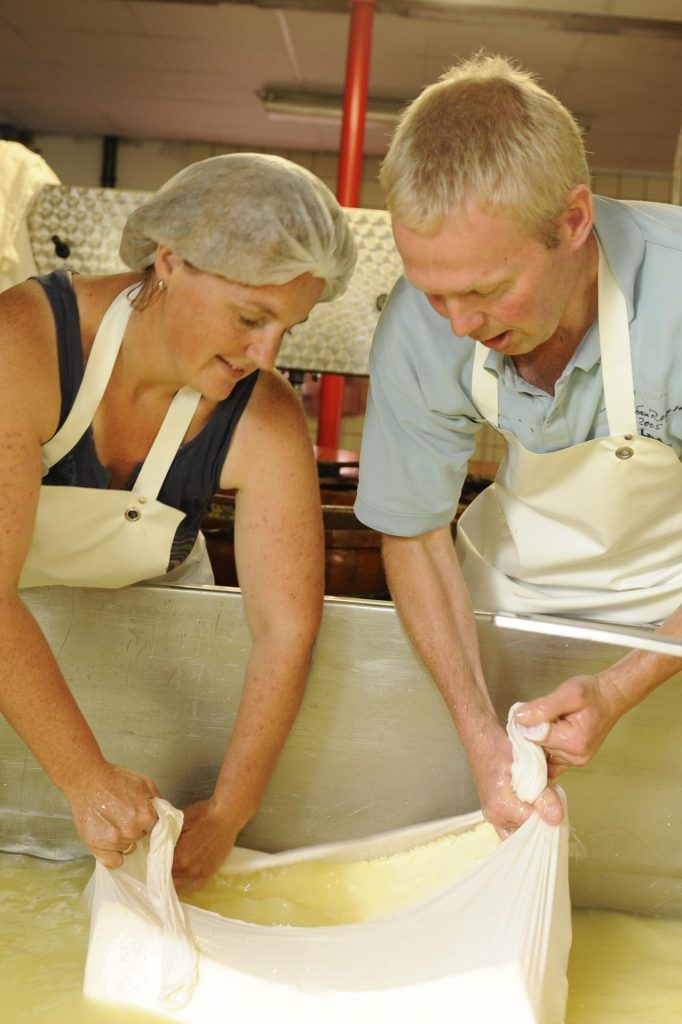 Farmer's Cheese vs. Farmers Gouda Cheese
In the period from April to November the milk is processed into so-called heavy Farmers Gouda Laying Cheese, which also has a place in the Ark of the Taste of Slow Food. The name Farmer's Cheese says the cheese is made from fresh, unpasteurized milk. Deposit means that the cheese is intended to be stored for a long time ( to be laid), so to grow old. Heavy means that the cheese weighs more than 20 kg. Only Farm Wateryam and Captein Cheese Farm still make Boer Gouda Oplegkaas.

The grass is the base, what about that?
This is evident from Hugo's expertise: "The turf and its composition is at least thirty years old. We never sowed anything. There's some clover in there, timothy and also street grass. And we won't let the grass bloom, because then the fut will go out."

How environmentally conscious is your business?
"We do not go for the highest milk production. The cows are definitely not on their toes in terms of milk production. We want to farm in a way where we feel good. With nature. We have deliberately chosen a land-based company, which means that we can dispose of our manure on our own land. "We are considering having us certified as an organic company. For the best cheese, we want the cows to graze outside as long as possible and keep the growth in the grass. But we can't do that without fertilizer, so we can't become 'organic' yet. Furthermore, we do not mow the ditch sides, protect the nests of meadow birds on all our land and still use thirty hectares of land from the State Forest Service. There we mow the grass in mosaic management so that the young pullers can always hide among the tall grass. It is also a nice coarse textured grass, which fits perfectly into the ration of our cows. We are now working with the State Forest Service to create a plan for the whole company to keep even more meadow birds here and attract new ones there."

"This is what suits us: that the cows don't have to walk on their toes in terms of production"

And what about antibiotics?
"We are below the standard when it comes to the use of antibiotics. We prefer to farm without antibiotics, but a few years ago the cows got udder inflammation. Since then we do use so-called dryers, which is penicillin which protects the udders of a cow at the end of the lactation period. We lost some of our oldest and best cows at the time. We don't want to go through that again."

What's the secret to your cheese?
"That starts with the fresh grass that the cows can take to their heart's content. And, of course, it's raw milk cheese. Moreover, we only make large cheeses of at least twenty kilograms. A large cheese matures longer and otherwise so you get more taste. That you can put something away without preservatives for eighteen months and longer, isn't that special?!"

"That you can put something away without preservatives for eighteen months and longer, that's special?!"

"We buy our rennet and acidity. I dare not risk using homemade acidity. The fact that we use wooden barrels instead of plastics also matters because the wood holds the temperature of the cheese longer, which makes it sour better." Nice detail: a number of barrels are still original from the thirties with the initials of grandpa on the bottom. And let that be the same initials as Marije's husband. Why do we still want to know why should the cloths preferably be linen? "That's because linen doesn't close when we take the cheese out of the meadow." All in all, the combination of grazing and the way of making cheese makes the cheese a recognized Slow Food Presidency, the Boers Gouda Cheese.

Have you ever considered a natural crust?
"I am apprehensive about this because we allow our cheeses to mature elsewhere, from two regular customers. Their halls are, I think, not suitable for laying up cheeses with a natural crust. I don't say never, but then I should delve into it even more." 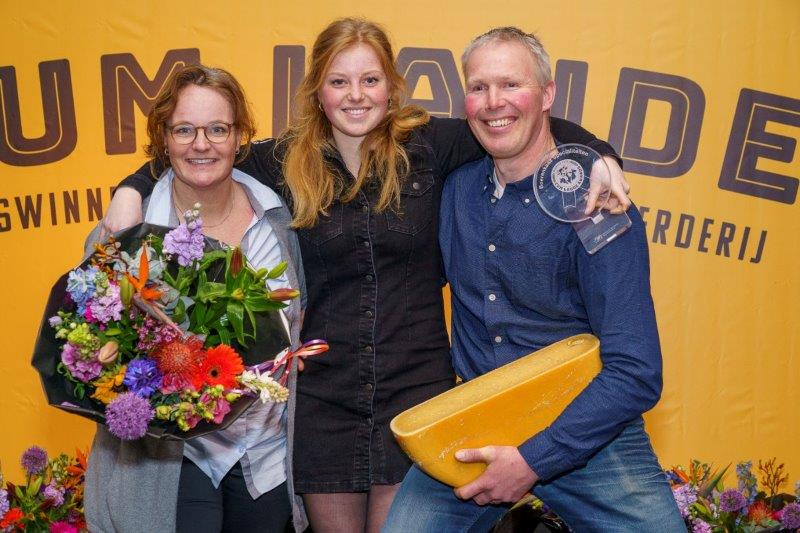 u have a great company, you make cheeses with which you win prizes and consumers know how to appreciate your products. What do you wish for the future?
"Hugo's grandfather only had Blisterheads. When we inherited the herd it was already a mixture with Holstein Frisian cows. Who might want to go back to that authentic composition of one hundred percent Blaarheads? But of course, you're not going to get rid of all the animals all at once. It takes time."

"Because we live on an island, we don't have a home shop. For about ten years now, some ten lakes have been on tour boats here. Then volunteers from the meadow bird association explain the birds and I tell you about the cheese. But I would like to show the consumer even more what we are doing here."

"And then we have one last wish: that our cows age. The average age is now about five years. That has to do with that udder infection I mentioned earlier. But of course they have to be able to get much older.' And yes, of course Marije and Hugo hope that their business will continue later. But the children have to make their own choices, they think. "It's a way of life, everything here is all about the cheese. It goes far beyond just work."

Would you like to know more about Boers Gouda Cheese?
Visit one or more of the following websites:

– This article was written by Ulrike Schmidt. Ulrike is a lyricist with a focus on food, food and the link with our earth. She owns communication consultancy Meander Media and has been volunteering for the editorial team of Slow Food Netherlands for years.