From the Brabant Bellefleur to the Soester tuber and from the Champagne 'Red Rhubarb' to the Zeeland Lobster; The Netherlands has special seasonal products. Every season we in the kitchen are inspired by great culinary variety. Slow Food wants to promote the consumption of these products and therefore goes on a year-long culinary journey through the Dutch food culture. We want to show how diverse and beautiful our local food offer is and draw attention to products from the Ark of Taste. This time in the spotlight: Boeren Gouda Cheese.

Suppose we see the flood coming, what vegetables, fruits, grains, animal breeds, meats, cheeses and beverages should Noah bring to his Ark? That is the question that the initiators of the Ark of Taste asked themselves when starting the Ark. One of the products that can be brought on board and which the Netherlands can be proud of is the Boers Gouda Oplegkaas (BGO). For those who have never tasted this delicious cheese, and for fans of this cheese, there is good news. This cheese is available all year round, so we can enjoy it all year round. Moreover, Boeren Gouda Oplegkaas is also united in a Slow Food Presidency!

The facts in a row

International name: Aged Artisanal Gouda
Latin name: –
Abbreviation: BGO
Season: production available in the summer months / all year round
Distinguish from other cheeses: a pleasant and creamy sensation with a slight butter smell. A light taste of walnuts and hazelnuts with a savory bite
Did you know that… Gouda cheese is made and sold all over the world, but only a very small part is really Farmers Gouda Cheese?

Farmers Gouda Cheese is a protected brand name and should only be used if certain requirements are met. For example, the cheese must meet the following requirements:

Only the cheeses that meet the above requirements can actually be called Boerse Oplegkaas. There are only two producers left where this cheese is made; captein in Zoeterwoude and with van der Poel family in Rijpwetering.

How did it go back in the day?

The Green Heart used to have naturally very tender grass. Cows grazed on the grass and farmers made fresh and long-tenable summer cheeses in the Middle Ages. In the seventeenth century, the great commercial shipping flourished, professionalizing the production and trade of sustainable summer cheese. The cheeses were traded in central places, such as at the Waag in Gouda. The Gouda summer cheese became extremely popular in the United States at the time – and partly because of its popularity, Gouda cheese is still very popular abroad.

However, the vast majority of Gouda cheese exported abroad today is made in large numbers and in industrial settings. The authentic and traditional way of making cheese has been largely lost. There are now only two cheesemakers producing real Gouda Farmers Laying Cheese. United in the Presidency Boers Gouda Laying Cheese, several dairy farmers work together to produce farm cheese according to a product specification drawn up by them. Together with their affineurs and stichting Boeren Goudse Oplegkaas they focus on the promotion of the production, availability and consumption of Boerse Oplegkaas. 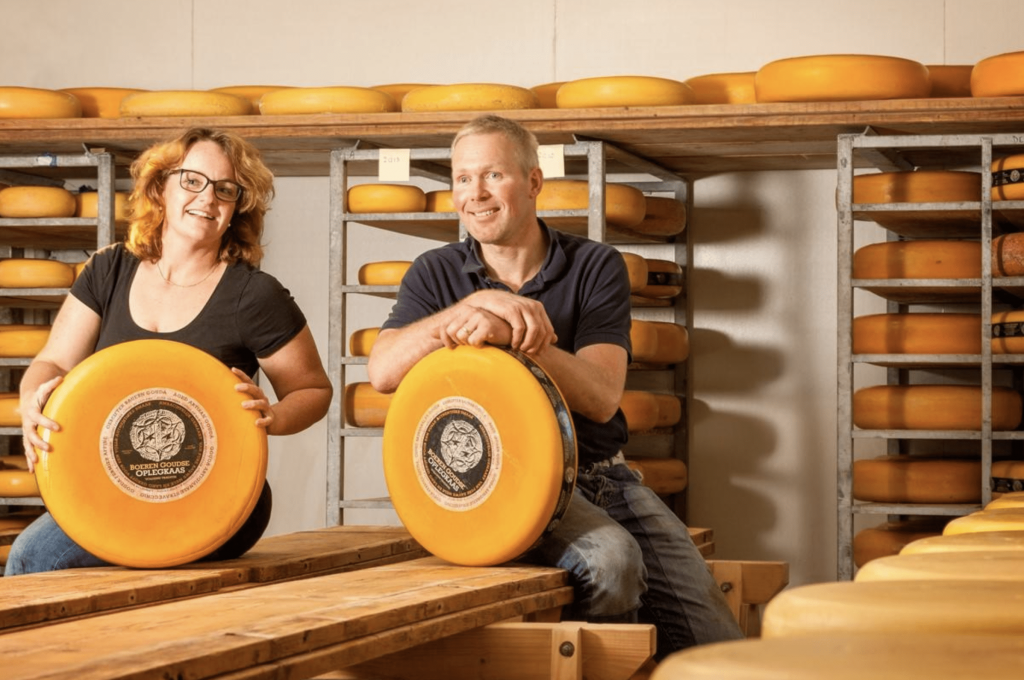 Cheesemaking: how does that work?

Farmers Gouda Pickle cheese is made with traditional ingredients (raw summer milk, natural rennet and sours). The milk is mixed with the rennet and acidity. After curdling, it is cut into small pieces of curd. The curd is then put into linen cloths and pressed into wooden barrels. The curd and linen cloths are placed in a brine bath for a few days and then given a coating to protect the crust. The cheese is then imposed for ripening. The cheese must mature for at least a year and a half (also called 'imposing'; hence the name 'Laying Cheese') at a temperature between 13°C and 15°C degrees – at a humidity of 82 to 86 percent. Only in this way does the cheese get its full flavour and aroma. The affinage has to be done in the Netherlands, but unlike the production of the cheese, this does not have to take place in the Green Heart. The maturation process is from the Farmers Gouda Opleg cheese is very important for developing the a unique taste of this cheese. The cheeses are stored on unpainted wooden planks and are regularly turned. The cheese can ripen for up to three to five years. Due to the unique way of making and the craftsmanship of the cheesemakers and affineur, it still remains cutable. 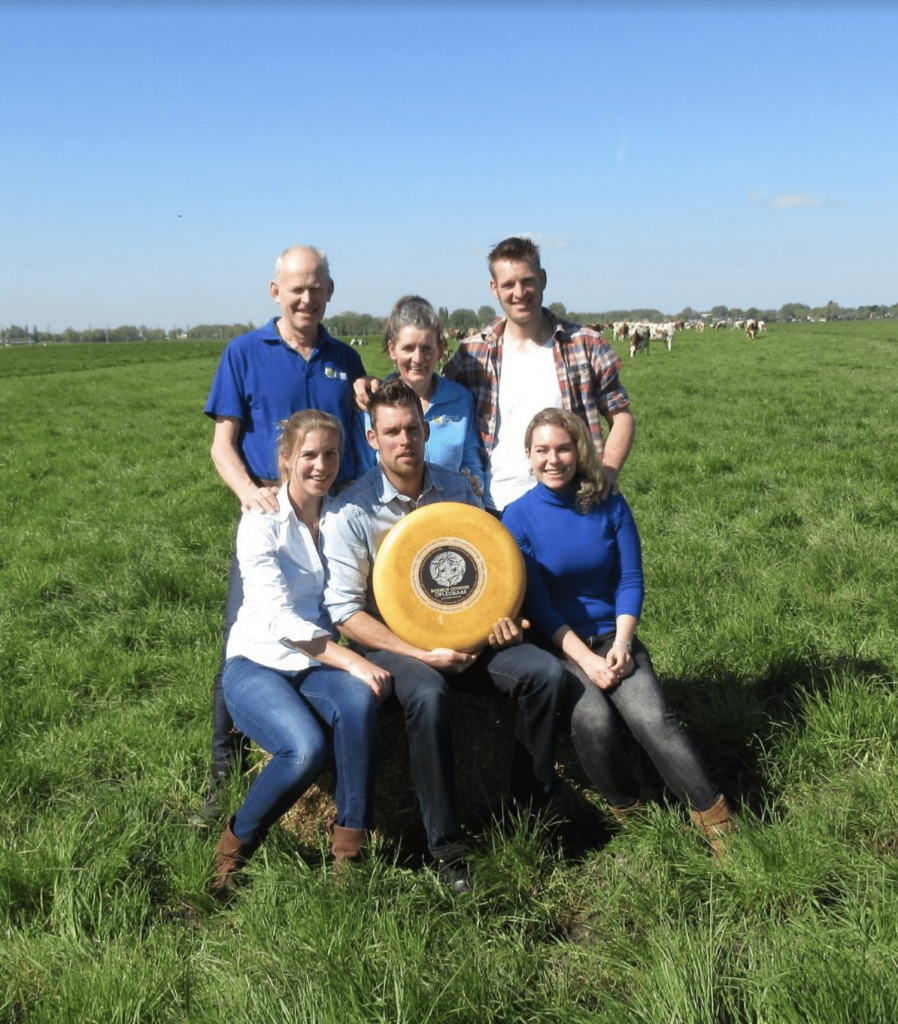 Farmers Gouda Cheese is also to be tasted in various restaurants. Here's a selection:

– Do you want to eat more locally and out of season? Slow Food Netherlands developed a unique culinary calendar for your kitchen wall with special Dutch fruits and vegetables. Farmers Gouda Cheese is also depicted on it. Order the poster www.slowfood.nl/kalender.

About the Ark of Taste

The Ark of Taste is an international catalogue of small-scale quality products that belong to a specific culture, history or tradition of a region or country. By placing special fruits and vegetables, cereals, animal breeds, beverages, cheeses and meats in the Ark of Taste, we offer a platform and invite everyone to protect these products by buying and eating them again. Or – in the case of endangered wild species, for example – by not eating them more or much less so that they can reproduce.

The Ark of Taste is a project of Slow Food with the aim of preserving and restoring biodiversity. We do this because the diversity in crops, animal breeds, but also the diversity of local cuisines is rapidly decreasing. This is not only a pity, but also a risk to the future of our food system. Because when certain races and traditions disappear, we don't just get back. While a large biodiversity can make the food system flexible and future-proof. For example, when it comes to climate change.

Worldwide, more than 5,000 products are now included in the Ark of Taste, of which 76 are Dutch. The Ark of Taste is a living project that can always be added to new products. These are reviewed by the Ark of the Taste Commission.

This article was written by Carmen Groeneveld. Carmen has had a huge passion for food since she was a young age. Over the years, her passion for good and honest food has grown. After graduating from the Hotel Management School Maastricht, she deepened her knowledge through a master's degree at the University of Gastronomic Sciences (also known as the University of Slow Food) in Pollenzo, Italy. There she learned everything about Slow Food. Carmen recently became an editor for Slow Food Netherlands.